'Buildings that breathe' engage with the city and harmonise with the setting in which they sit. Hobbs Park exemplifies this approach and echoes Lat27’s ethos of crafting contextually responsive public spaces of the highest quality.

'Buildings that breathe' engage with the city and harmonise with the setting in which they sit. Hobbs Park exemplifies this approach while echoing Lat27’s ethos of crafting contextually responsive public spaces. In close collaboration with BVN, this influenced bold moves such as the folding origami podium edges and the fine details expressed in the stone planter walls.

This elevated public park sits over the former gardens of Adelaide House, Queensland’s first Government House. Established by Dr William Hobbs, the gardens extended down to the river capturing scenes of forested edges, sneaky river glimpses and the backdrop of Petrie Bight rock face beyond. 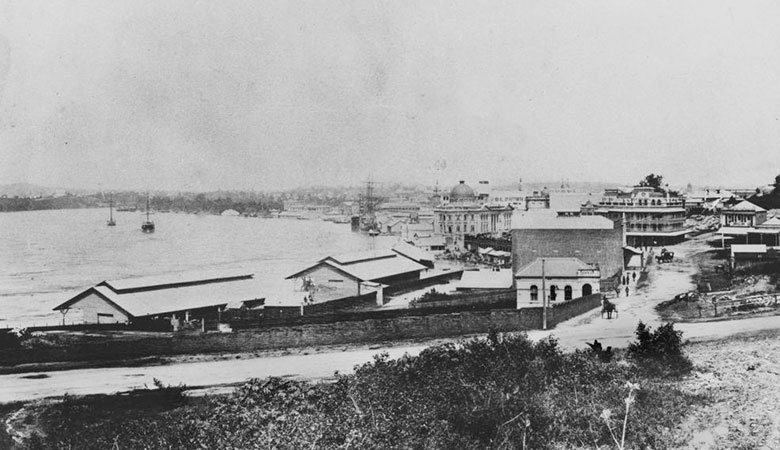 Our goal was to create a contemporary space that engages with the site's history and reflects the qualities of the adjacent cliff face. Reinstating the elevated vantage point and an iconic perspective, the park offers more than simply a ‘titanic moment’ of standing on the precipice.

The gnarly textures of the cliff with its cascading vegetation, coupled with the memory of the historic Hobbs garden, crafted a place of expression where we, like Hobbs, entertained experiment.

Although elevated, the northern portion of Hobbs Park feels grounded. This was achieved by borrowing the landscape and visual connections to the cutting, former homestead and the surroundings of St Jones Cathedral.

The tessellated edges, akin to the fracturing and natural erosion of the rock surface, plays out in the tension between hard and soft surfaces. Spatial scale is defined through the raking vertical planes and voids within the structure, which relaxes the building mass.

The ravine that transects the site connects Adelaide to Queen Street, establishing a key cross-block pedestrian connection with spatial drama that plays out through an ever-changing range of experiences. Entering the ravine from Adelaide Street, the façade peels back to reveal a 350sqm artwork a rainforest mural digitally printed onto laminated glass tiles, by local Artist Danny Mellor, that shrouds the central atrium space. 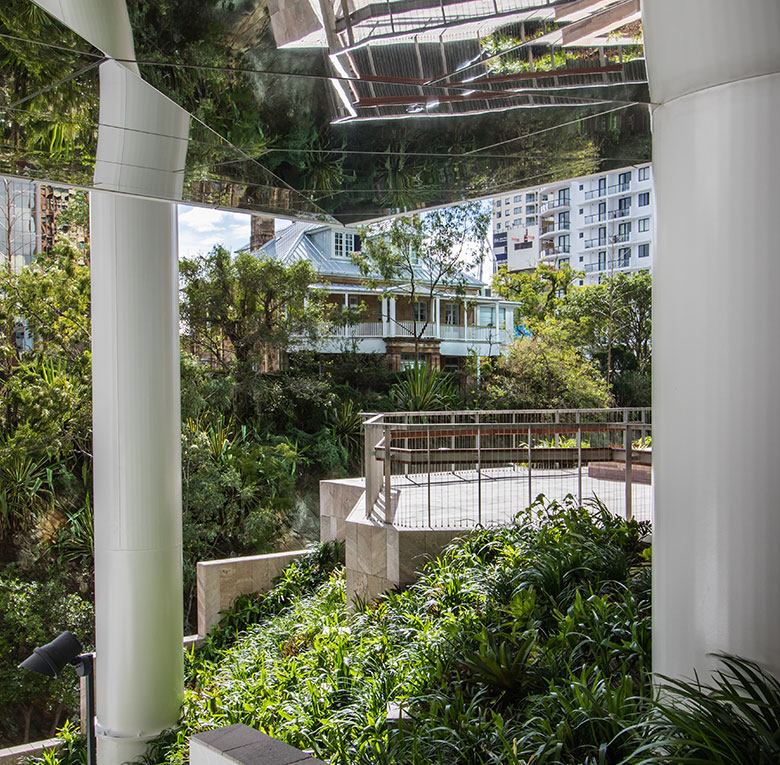 Moving through the atrium, from street to 'park', a folded and polished stainless steel soffit reflects distorted fragments of the artwork and glimpses of the surrounding landscape overhead.

Voids generated by the strong geometrical building form create a range of distinctive places for respite and opportunities to nestle into the hillside and connect to spaces beyond.

Connection to the surrounding context is further expressed through stonework and thoughtful material selection. The Juperana stone was selected due to its complimentary characteristics to the adjacent stone cutting on Adelaide Street. Its tonal range was regulated throughout procurement and installation to assure harmony between the two.

The expression of stone appears in a number of formats, textures and scales throughout the design and generates the broader fret of the façade, the monolithic appearance of the ground plane and the stratification of the landscape walls.

The Adelaide Street façade mirrors qualities of the cliff face, revealing open crags filled with the vegetation of greenwalls and cascading planters. The foliage extends down the folded podium raking gardens from the park to touch the street and connect elevated spaces to the ground.

The planter walls consist of two formats with subtle variations in the detail of the exposed edge and face building intensity around high use areas and seating nooks where visitors are encouraged to gather.

The floor texture provides complexity at the pedestrian level but reads in long view as a monolith. Discrete custom designed stone infill lids aligned to the tile pattern hide the drainage, service and access functions of the ground plane, letting the planting draw your eye through the site and frame key views. 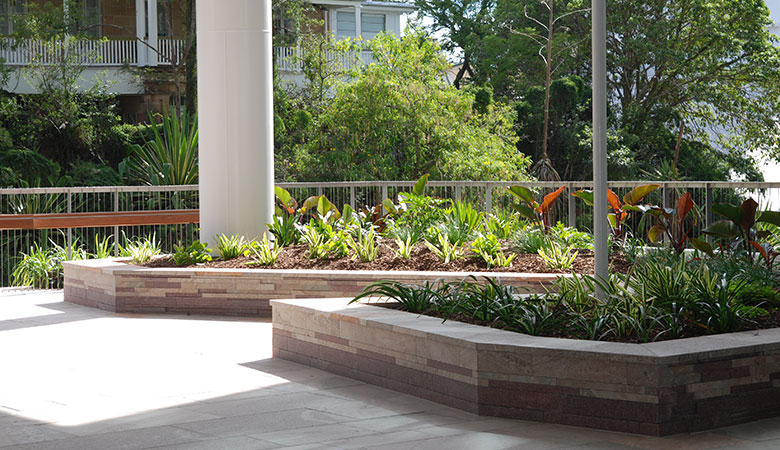 As the planting extends throughout the park, the influence of the gnarled cliff vegetation, blurs into foliage and arrangements more reminisce of a heritage garden. 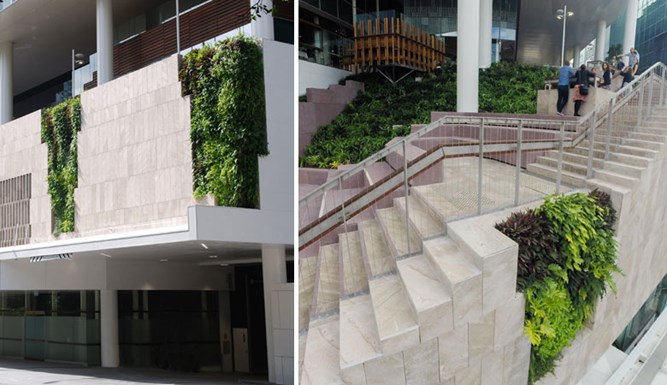 The qualities of the park were transposed to the terrace on level fourteen. Detailed applications of stone, planting and water features combine to establish an articulated folded enclosure. The arrangement of the landscape reinforces a variety of spaces and rooms designed for gathering, cooking and retreating. 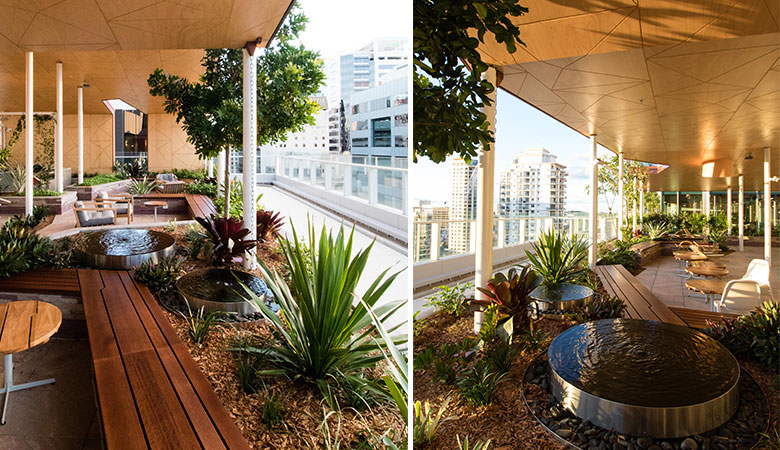 Crowning the building is an a 32nd level function space. A grove of Hibiscus trees rising from a spacious spotted gum deck is lined with glass wind screens affording spectacular views of the Brisbane River and Story Bridge.

The success of 480 Queen Street ultimately lies in its integrated architectural and landscape architectural response to place heritage and topography. Overarching subtropical design drivers are expressed through layers of thoughtful detailing to strike a balance between complexity and elegance. 480 Queen Street delivers an engaging public space that contributes to a broader understanding of subtropical design. 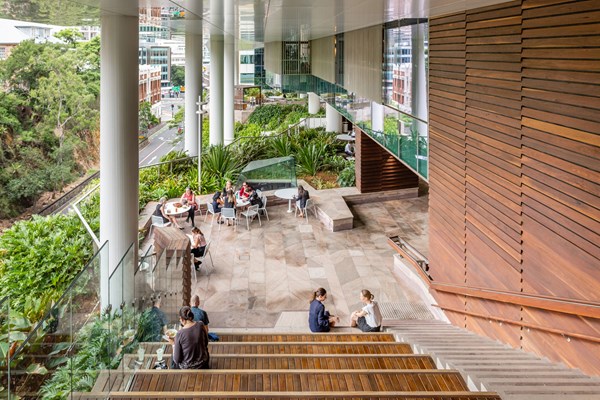 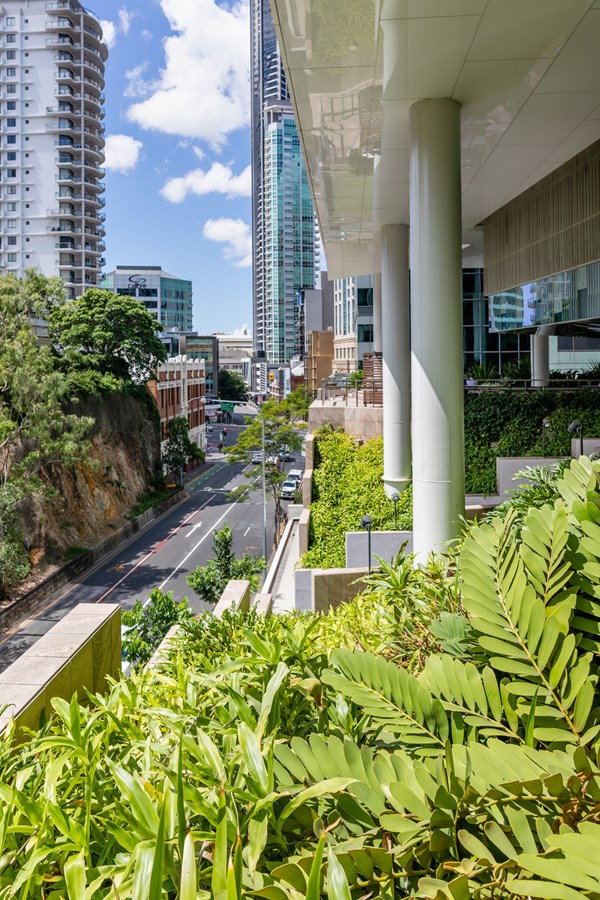 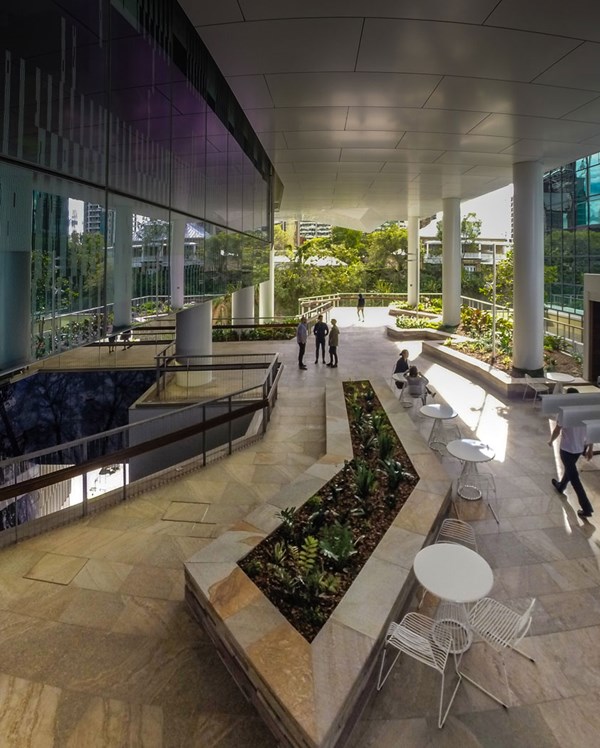 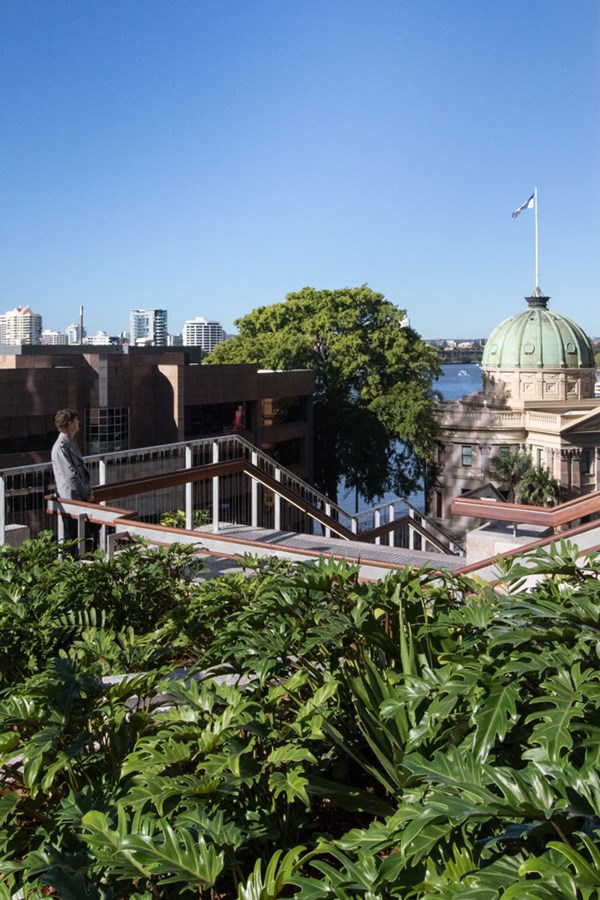 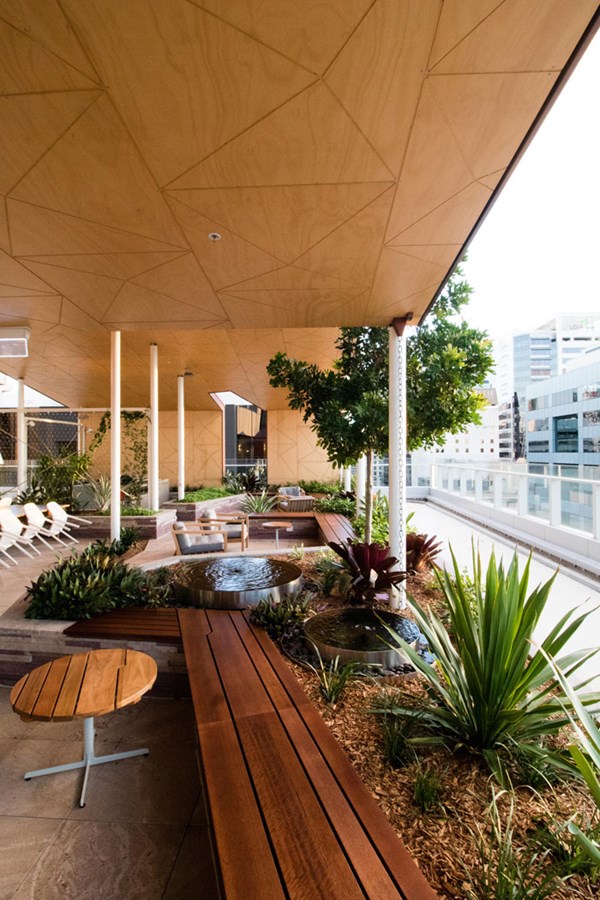 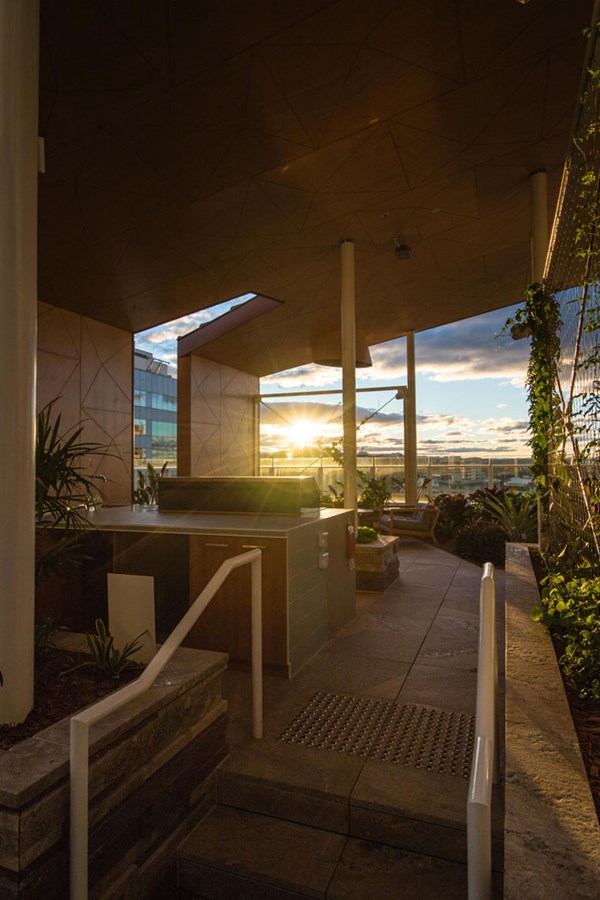 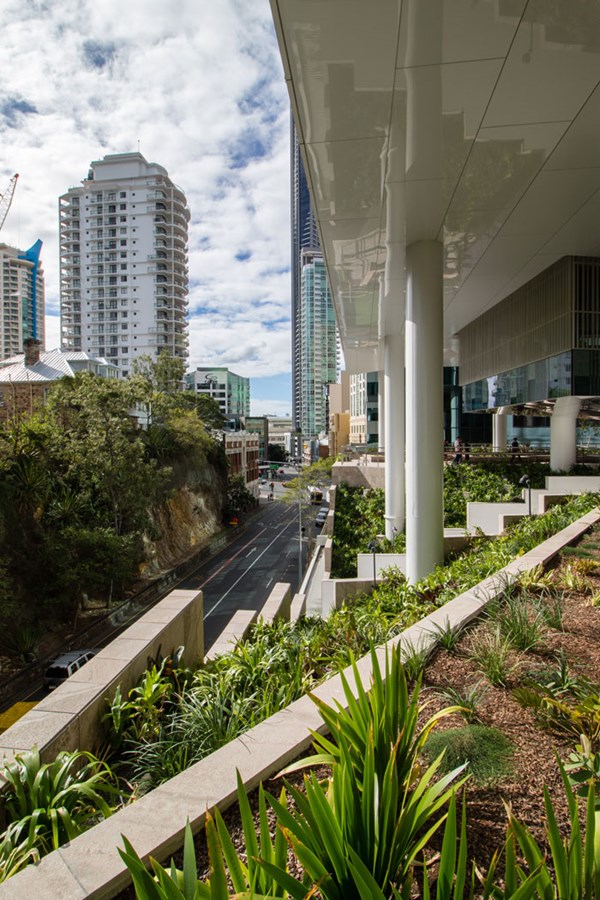 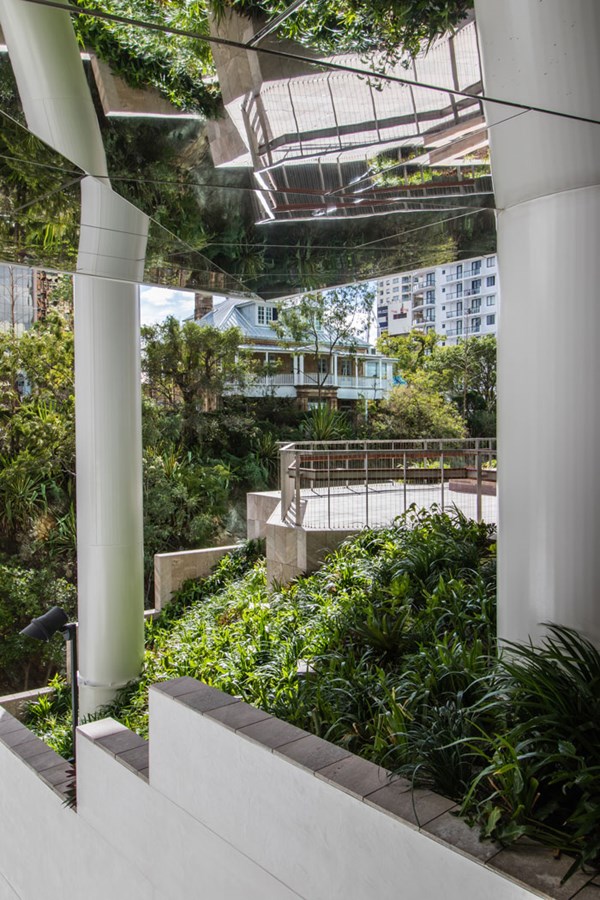 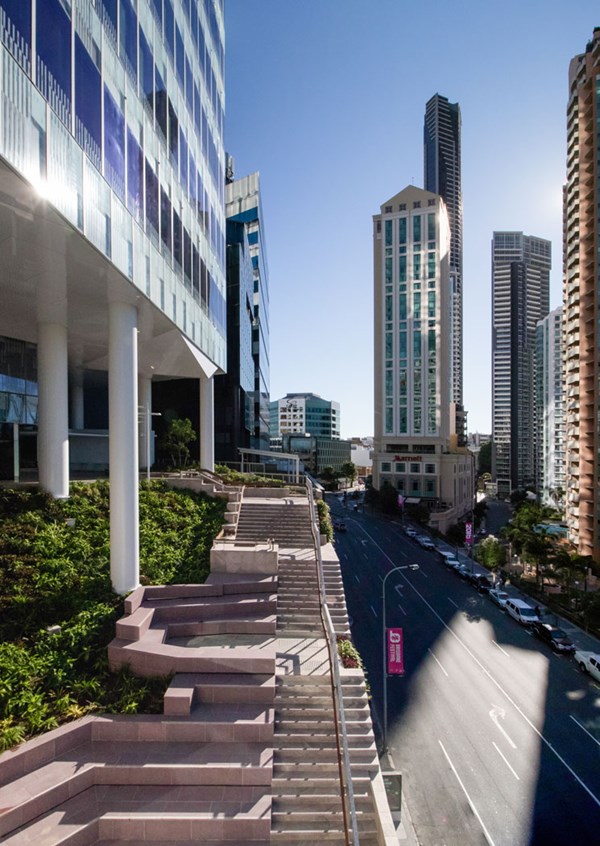 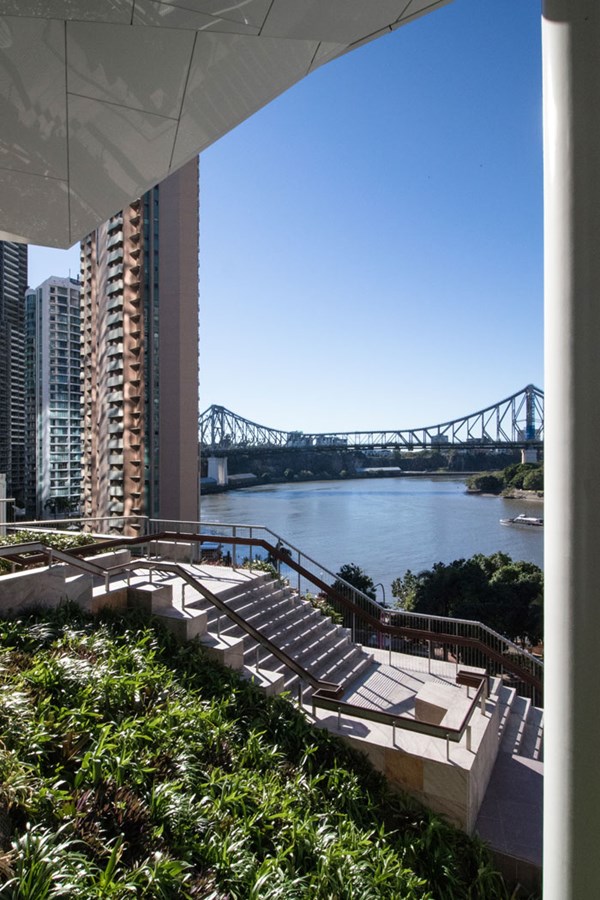