The team at Lat27 are proud to have received two Awards for Excellence at the 2016 AILA Queensland Awards on Friday night. A big thank you goes out to AILA Queensland for hosting a great awards night. Much deserved congratulations to our talented colleagues for their award wins on the night. It's great to see such a high quality and diverse range of projects submitted every year - an amazing representation of the Landscape Architecture industry in Queensland. Check out the entire list of award recipients here.

Both of our projects will now go on to the AILA National Awards to be judged and announced at the National Conference in Canberra in October. 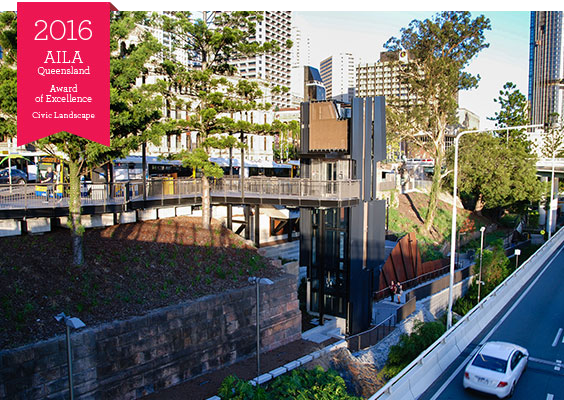 The Brisbane Ferry Terminals won the Queensland Award of Excellence within the ‘Civic Landscape’ category; projects that are public in nature, capturing and contributing to the culture and amenity of the urban environment.

We thank the team at Brisbane City Council, Aurecon, Cox, Certis, Dot Dash, RLB, Arbor Australis, Conrad Gargett (heritage) for their collaborative support in integrating these complex insertions along the river edge. The project critically enhances accessibility to the river, celebrating its history and importance to the city through the integration and revealing of heritage structures and places. 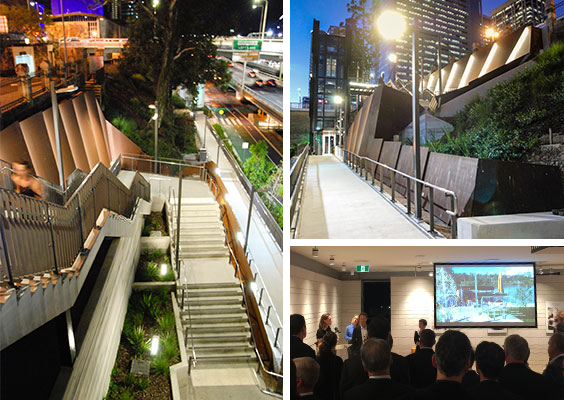 The Brisbane Ferry Terminals Project demonstrates consummate skill in the integration of infrastructure into highly developed existing landscapes, substantially improving the amenity of the urban environment. An outstanding collaborative design process has resulted in a series of robust landscapes connecting people to public transport, executed in thoughtful and sophisticated detail. The sheer variety of landscape challenges the designers have met in integrating ferry terminals into eight socially, geologically and topographically different existing landscapes along a flood-prone river is impressive. The results showcase the strength of Landscape Architects in fine-grained thinking based on rigorous research, and the humility to intervene in existing landscapes rather than simply impose new forms. This project has made a substantial and invaluable contribution to the public amenity of the Brisbane urban landscape, enriching the relationship between the city and its river.

The ‘La Foresta’ Garden, Mount Alvernia College, won the Queensland Award of Excellence within the ‘Gardens’ category; contributing to the role and understanding of the garden in contemporary society and culture.

We would like to thank the team at m3architecture and the Mount Alvernia College leadership group for their collaborative efforts, while also acknowledging that the continued and future success of the project is greatly attributed to the students and gardeners who tend to it; these projects need champions!

The role of the Landscape Architect on this project was greatly supported by the collective energy and enthusiasm of the team over the last 3 years, which has seen the project come to life - from early concept design to delivery (and production!). 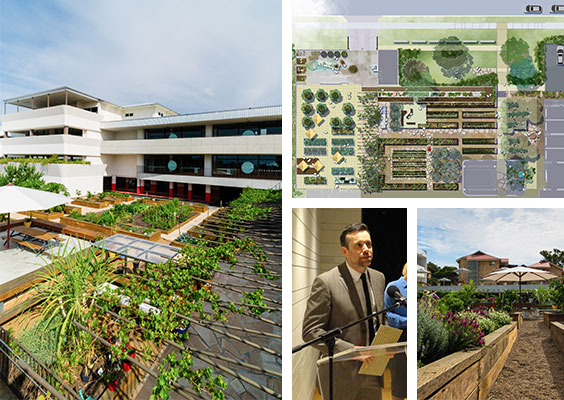 ‘La Foresta’ productive garden at Mount Alvernia College makes an outstanding contribution to the understanding and valuing of the role of gardens in our society. As an inner-urban school landscape, it has been designed holistically as a learning space, a social space and a source of food. Based on leading research into ‘learning landscapes’, and in collaboration with the school, the Landscape Architects have designed a garden which is integral to the school curriculum, not merely an adjunct space or discrete outdoor classroom. Skillfully balancing form and function, ‘La Foresta’ promotes the leading role of Landscape Architects in garden design, showcasing possibilities for integrating local food production into urban environments, and in harmony with contemporary architecture. This landscape reimagines and reinforces the value of gardens in our society as spaces for socialising, learning and growing.